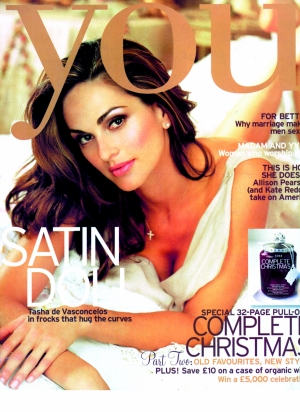 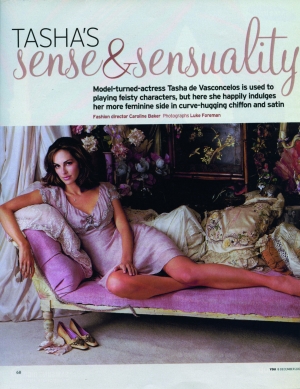 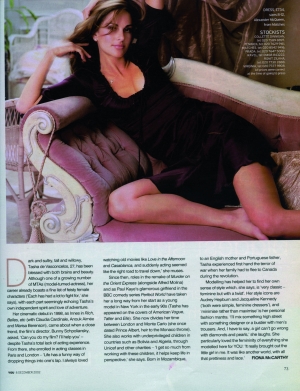 Model-turned-actress Tasha de Vasconcelos is used to playing feisty characters, but here she happily indulges her more feminine side in curve-hugging chiffon and satin.

Dark and sultry, tall and willowy, Tasha de Vasconcelos, 27, has been blessed with both brains and beauty. Although one of a growing number of MTAs (model-turned-actress), her career already boasts a fine list of feisty female characters ('Each has had a lot to fight for,' she says), with each part seemingly echoing Tasha's own independent spirit and love of adventure.

Her cinematic debut in 1998, as Innes in Rich, Belles, etc (with Claudia Cardinale, Anouk Aimée and Marisa Berenson), came about when a close friend, the film's director, Bunny Schpoliansky, asked, 'Can you do my film? I'll help you' -despite Tasha's total lack of acting experience. From there, she enrolled in acting classes in Paris and London - 'Life has a funny way of dropping things into one's lap. I always loved watching old movies like Love in the Afternoon and Casablanca, and suddenly acting seemed like the right road to travel down,' she muses.

Since then, roles in the remake of Murder on the Orient Express (alongside Alfred Molina) and as Paul Kaye's glamorous girlfriend in the BBC comedy series Perfect World have taken her a long way from her start as a young model in New York in the early 90s (Tasha has appeared on the covers of American Vogue, Tatler and Elle). She now divides her time between London and Monte Carlo (she once dated Prince Albert, heir to the Monaco throne). She also works with underprivileged children in countries such as Bolivia and Algeria, through UNICEF and other charities - 'I get so much from working with these children, it helps keep life in perspective,' she says. Born in Mozambique, to an English mother and Portuguese father, Tasha experienced first hand the terror of war when her family had to flee to Canada during the revolution.

Modelling has helped her to find her own sense of style which, she says, is "very classic -feminine but with a twist. Her style icons are Audrey Hepburn and Jacqueline Kennedy ('both were simple, feminine dressers'), and 'minimise rather than maximise' is her personal fashion mantra. 'I'll mix something high street with something designer or a bustier with men's trousers. And, I have to say, a girl can't go wrong with diamonds and pearls,' she laughs. She particularly loved the femininity of everything she modelled here for YOU: 'It really brought out the little girl in me. It was like another world, with all that prettiness and lace.