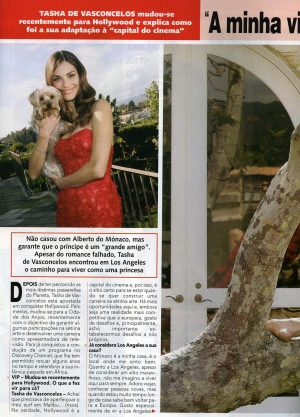 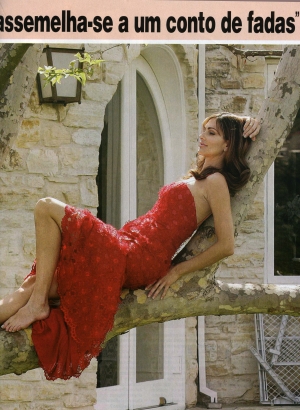 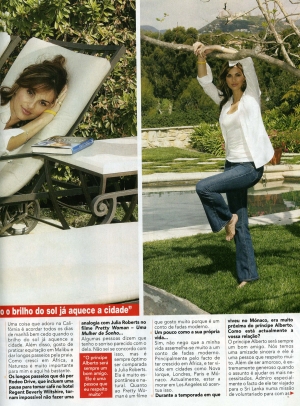 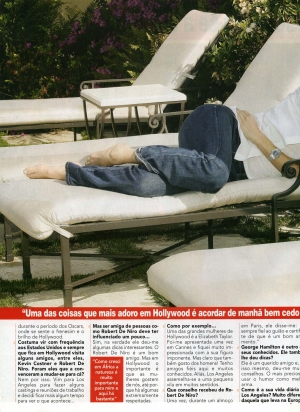 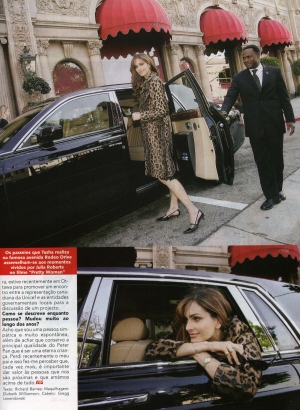 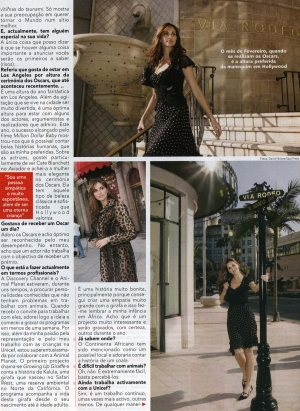 After a highly successful career as a supermodel, having been mooted by some as the "perfect Princess" for Prince Albert of Monaco, and seen in past years gracing stage and screen in Europe, Tasha de Vasconcelos has taken up a new challenge: Hollywood has become her "second home". Her most recent film role, a short but very sultry appearance in "Johnny English" with Rowan Atkinson, left some critics comparing her in style to Julia Roberts, although ultimately more exotic. This is thanks to her Portuguese and English genes, and having grown up on the wilds of Mozambique, before moving to Canada with her parents after the revolution. Her newest role, in a feature for Discovery Networks, reflects her African upbringing. In "Animal Planet - Growing Up Giraffe", soon to be broadcast around the world on 180 stations, Tasha takes us on an incredible journey with a baby giraffe and the devoted human caregivers who help raise it. It looks like being the first of a number of appearances on the network, following in the footsteps of Brad Pitt and Jennifer Aniston... but will she land a major film role? In any case, Robert de Niro is reported to have described Tasha as "an Angel in Hollywood", and Kevin Costner in Monaco for the Pro-Celebrity Golf tournament, was quick to notice her beauty and talent. We join Tasha for a day in her life in the city of Angels.

Tasha what prompted you to come to LA? Surely the competition is far fiercer here than in Europe...

I thought I needed to polish up my surfing In Malibu. Actually, Hollywood is the movie capital, so it's the obvious place to be. About the competition -I love a challenge. You can only compete with yourself anyway.

So Los Angeles has become your home away from home?

Monaco is home. My life has always involved a lot of Travel. Los Angeles is
wonderful, but I couldn't imagine living here permanently. I love coming here, meeting people, and doing what I have to do, then heading back to Europe. I especially love being here during the buzz of the Academy Awards, with the excitement and sparkle.

I know you´d been over to visit friends like Kevin Costner and other famous people here. But now you spend a few months of the year here. What was the turning point that sparked you spending more time here?

I came here for some screen tests and meetings and I decided it would be logical to spend more time here.

Knowing people like Robert De Niro, it must help a little...

Well actually, he did give me some interesting tips. He´s a good fiend. But
interestingly it´s important that the women like you here. I think Hollywood has some very strong women who are highly respected.

Who could you cite as an example?

I first met Elizabeth Taylor in Cannes at Amfar. She's one of the truly great women of
Hollywood. Of course I love the men too!! I have lovely friends here and many acquaintances. It´s much like a village in many ways.

You said DeNiro gave you some advice. What was it?

Over lunch in Paris he said: "Always be true to the script, and make sure it´s a great script."

George Hamilton is another cohort. Did he give you any advice?

He's dear friend. Lots of advice... and he recommends humour in everything.

Tell me about your day to day life when you´re here in LA. What´s different about living here and what do you like the best?
There is something to say about waking up with the sun every day. I love riding in Malibu and going for walks on the beach. As I grew up in Africa, nature is very important for me and I love that about California.

You're also part of a Hip-Hop Yoga group. That sounds pretty weird...

It´s quite interesting actually. The teacher is the Tiger Woods of Yoga teachers. It´s not at all like a regular yoga class. There's the hottest, coolest music but it's very relaxing.

Back to work... Tell us about your new role.

Discovery Channel and Animal Planet were looking for celebrity personalities who could work with the animals. Aside from the passion I have for my acting work and UNICEF with the children, I am thrilled to work, with Animal Planet. The first project was "Growing Up Giraffe". The story is centred on Kalula, a new born giraffe at Safari West in Northern California , were we follow her journey... from her miraculous birth through to adulthood. Safari West is also the favourite escape for Robert Redford. The people at Discovery have made the show very personal. They've brought in Africa and my childhood with pet lions and mongoose. This first programme will be airing at the end of March. It´s a very beautiful story... there was a real chemistry between the giraffes and me. I was hugging them all the time! It was a great project and there will no doubt be others to come throughout the year.

Africa has been mentioned as one option and I would love to do a Koala story.

W.C. Fields once said "never work with kids or animals". Isn't it difficult working with animals?

Oh no. I think animals and kids are the easiest to work with. They're so direct ... So I don´t agree with him.

Back in Monaco, in the past, we´ve seen that you were very close to Prince Albert. Are you still in contact with him?

Prince Albert is always a friend. We've had a lovely friendship which continues and he's someone I respect very much, He does a lot of good in the world and is extremely generous when it comes to helping the needy. I especially admire the fact he's gone on a mission to Sri Lanka for the Tsunami victims which shows his implication and dedication to making the world a better place.

Do you have anyone "special" in your life over here?

All I can say is that if there is anything to announce you'll be the first to know!

The Academy Awards have just taken place. What do you think about the "Oscars"?

It is an exciting time of the year in Los Angeles. It's a buzzing place, and I love that, along with things like The Vanity Fair party. And it's a good chance to be with some of the actors, writers and directors who I admire so much. The success of Million Dollar Baby shows we're looking for those beautiful stories about human relations. Films like Casablanca have always been my yardstick. I also thought Cate Blanchet was most elegant. She had that sophistication from another time, but with a modern twist and that's what I think Hollywood is looking for again.

Do you aspire to an Academy Award one day?

I think the Oscars are wonderful, but you don't work to get an award. That being said, it's always nice to be acknowledged for excellence.

Are you still actively involved with UNICEF?

Yes. I was recently in Ottawa, meeting with the Canadian representative for UNICEF and the Governor General to discuss a project. It's a continuing passion of mine.

Here in Los Angeles, walking down Rodeo Drive and taking coffee at the Regent Beverly Wiltshire, I can´t help but make the analogy with Julia Roberts and Pretty Woman. I guess it's not the first time someone has said this...

People have said we have a similar Smile. Of course it's nice to be compared with Julia, and I admire her enormously... she's so spontaneous and natural, I loved Pretty Woman because it was a true love story and a modern day fairy tale.

A bit like your life... a modern day fairy tale...

My life in a way has resembled a fairy tale, growing up in Africa, then living in New York, London, Paris and Monaco and with so many amazing experiences. Now there´s a new episode in Los Angeles, and it´s true that my life is very much like a fairy tale.

How would you describe yourself as a person and how have you changed in the past couple of years?

I think I´m usually straightforward and spontaneous. I still hold onto the child whitin... a Peter Pan quality. I recently lost my father which made me realize even more that one should value the special people in one life and treasure each moment we have.